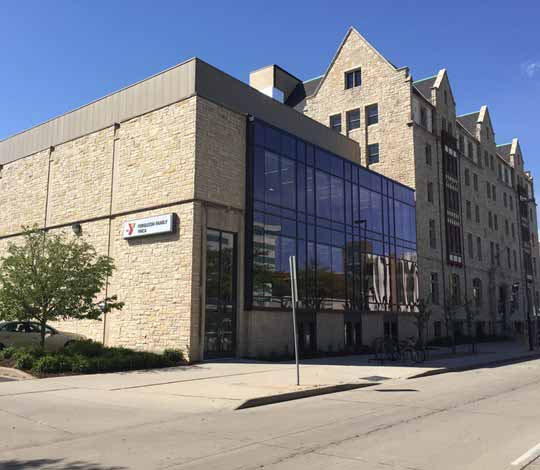 Since 1924, downtown Green Bay, WI has featured a beautiful, multi-functional YMCA. Thousands of residents and families have enjoyed this recreation and community space over the last 90+ years.

With the last major updates taking place in 1968, the structure was in urgent need of renovation. Thanks to successful fundraising, a hard-working construction and design team, and widespread community support, the Ferguson Family YMCA renovation project is now complete.

The YMCA’s leadership consulted with the community and Y members prior to embarking on this project. They concluded that the building had great historical and cultural significance to the area, and should be restored instead of torn down and rebuilt.

The $13 million undertaking began in April 2016 and took a year to complete. Construction was made possible with over $10 million in capital campaign donations. This overwhelming outpouring of community support parallels the $400,000 raised in the 1920’s (the most ever raised by a city the size of Green Bay, at that time in YMCA history) to construct the original building.

The most noticeable improvements include a two-story wellness area, an expanded gymnastics center, an open central atrium, and brand-new locker rooms. Artistic touches include blown up, black-and-white photos from the Green Bay YMCA’s archives and bright, cheerful primary colors used throughout the facility. In addition, the Y has expanded program offerings and equipment for every age level.

LaForce has been involved with this exciting project since the beginning. In the first phase of construction, the entire building exterior was restored. LaForce provided exterior doors and frames at this stage. The next phase involved mechanical systems and the third phase was the interior remodeling. For this final building phase, LaForce provided hollow metal doors and frames, wood doors, fiberglass reinforced plastic (FRP) doors, hardware, bathroom/shower accessories and partitions, wall protection, and fire extinguisher cabinets.

This building was recently placed on the Wisconsin and National Register of Historic Places; therefore, everyone on the construction and design team needed to respect and preserve old building elements. For example, original tile and crown molding are featured in the finished renovation. LaForce participated in these details by matching new doors/hardware to existing doors/hardware. In addition, the YMCA now boasts a beautiful “Founders Room” with museum-like display cases and historical photographs.

Over 2,000 area residents regularly use this YMCA facility, and number is expected to increase thanks to the expanded facilities and capabilities. LaForce is proud to have contributed so significantly to the design and construction of this important community project.

Previous Project
Back to all Projects
Next Project