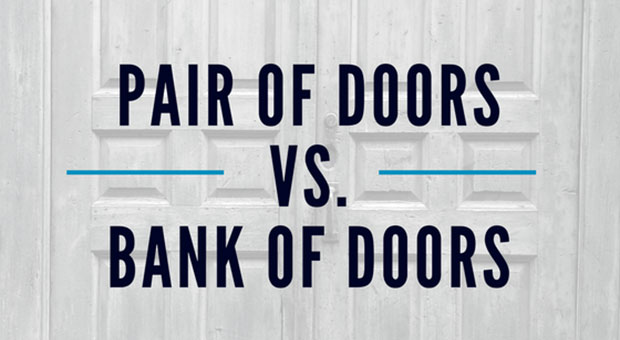 A pair has 2 doors in a 3-sided frame with no mullion between the doors.  To be a pair, the doors must swing in the same direction but from opposite jambs.

Exception: A pair could have a mullion but only if that mullion is located behind the doors (for the application of two rim exit devices).

A double egress opening is considered a bank of doors in the LaForce system, even though it uses a 3-sided frame, has 2 doors and there is no mullion between the doors.  Double egress are considered banks because the doors swing in opposite directions and they need to be beveled and undersized, more similar to doors which are part of a bank, not a pair.

** Typically the active leaf is on the right; therefore, B1 or P1 is the furthest leaf to the right.

See also our Door, Frame, and Hardware Glossary for any unfamiliar terminology!