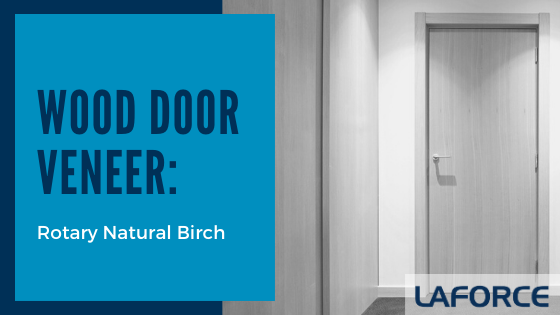 People choose commercial wood doors for their traditional beauty and distinctive characteristics, but have you ever wondered what causes the unique effects that make no two doors exactly alike? If so, it’s time to explore one of the most common veneer species, known as “rotary natural birch.”

First, it’s important to recognize that ‘natural’ grades of birch wood refers to the fact that both heartwood and sapwood make up the veneer. Heartwood is the harder central wood of the trunk that is darker in color, while sapwood is the softer, lighter part of the wood that exists between the bark and the heartwood. The choice of natural birch will incorporate both thus often producing large color variations and patterns within the same face. A selection process of the sapwood only, will produce a facing of ‘white’ birch. The selection of the heartwood only, will produce a facing known as ‘red’ birch.

Next, there are three commonly used cutting methods for birch veneer facing. Each method will produce a distinct and different appearance of the wood veneer. See photos above for some examples!

Rotary Natural Birch, therefore, contains both components of a birch tree (heartwood and sapwood). Depending on the cutting method, the same face can result in random uncontrollable color and patterns.  A great example is the “rocket-shaped” door, pictured above, which illustrates a unique design on a finished door that is the result of this type of wood and cutting method.

Rotary Natural Birch is one of the least expensive and most economical types of stain-grade products that LaForce encounters. However, since we want all of our customers to be satisfied with their final product, it’s important to be aware of the potential pattern variations that can appear on wood doors. LaForce can help talk you through what type of wood veneer works best for your door project, as well as the best veneer matching method.

*The fourth veneer cutting method, Rift Cut, is usually only used on oak wood. It is achieved by cutting at a slight right angle to the radial and procures a parallel grain pattern and a quartered appearance.

Special thanks to the knowledgeable sources for this blog, which include Bruce Massey, a 25-year veteran of LaForce’s Wood Door division, as well as the Window and Door Manufacturers Association (WDMA).