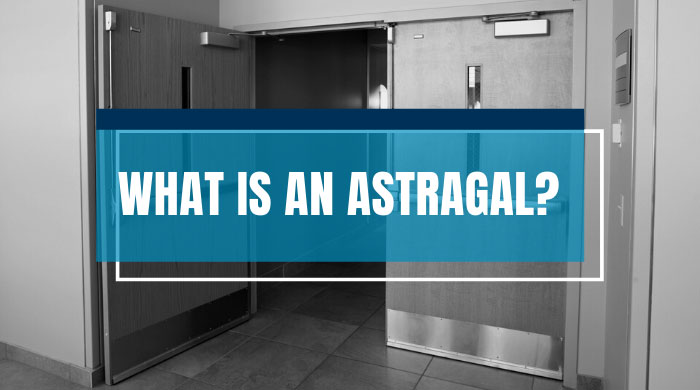 An astragal is a molding or strip that is used to close gaps in a door opening. They can be used to cover the space between a pair of doors, between the top of a door and a flush transom panel where there is no mullion, or between the top and bottom leaves of a Dutch door. For fire rated Dutch doors, astragals are required to ensure both the upper and lower leaves close at the same time. Astragals can also be used on single doors when specified, overlapping the frame face for security purposes.

Astragals determine whether both leaves can be active simultaneously or if the doors must be opened and closed in a particular order. They also help increase privacy, protect against certain weather conditions, and decrease the passage of light, sound, smoke, flames, and gas, which is important during fires. The NFPA 80 Standard for Fire Doors and Other Opening Protectives does not require astragals for fire rated doors, but some door manufacturers may require them in order to meet their fire door listing. Check out Lori Greene’s blog to learn about the NFPA 80 requirements on astragals. Astragals may also be required by the model building codes at certain pairs of doors within a building even when doors are non fire rated.

When using an overlapping astragal, a solid piece of steel, aluminum, wood, or other material is attached to one leaf to cover the gap, occasionally with a piece of gasketing. On pairs of doors, these types of astragals prevent both doors from being active; one door must be opened before the other and they must be closed in the correct sequence to fully shut. A coordinator is needed for self-closing same swing pairs of doors with an overlapping astragal to make sure the leaves close in the correct order. For Dutch doors, the astragal works as a coordinator.

Overlapping astragals are considered more secure. When they are mounted to the outside of the active leaf, they cover the gap between the doors on the secure side, which can prevent tampering with the latchbolt that is securing the two leaves together.

A split astragal (aka meeting stile gasketing) comes in two pieces. Each piece attaches to one of the leaves in the pair. The gasketing meets in the middle of the space between the doors, covering the gap to achieve a seamless look. Since each door has its own portion of the astragal and the only thing covering the door gap is gasketing, both leaves in the pair can be active; they do not need to be opened or closed in a particular order unless other hardware used on the opening requires it. If you would like both door leaves to remain active (ex. push/pull pairs, openings with vertical rod exit devices on both leaves, etc.), it is recommended that you use a split astragal.

When choosing the right astragal for your commercial opening, it’s important to consider security and how and where the doors will be utilized. Overlapping astragals require more coordination but offer increased security, and split astragals may allow both leaves to remain active. The door manufacturer’s listing can also offer some insight; manufacturers sometimes specify which type of astragal should be used, especially on fire rated doors.

LaForce is one of the country’s largest distributors of commercial doors, frames, hardware, building specialties, security systems, and more. We also offer a variety of services to help make your new construction, remodel, or restoration project easier. Contact one of our experts today to learn about all they ways LaForce can help you streamline you next project.