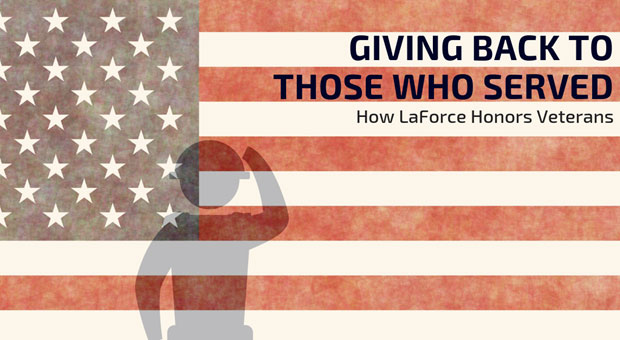 Veterans Day, held on November 11, is a day dedicated to honoring those who have served their country. Originally known as Armistice Day until 1954, Veterans Day originated on November 11, 1919, in honor of the first anniversary of World War I. LaForce is a proud supporter of the United States Armed Forces and veterans.

Every year the LaForce Volunteer program hosts veteran yardwork events throughout all four seasons. From shoveling snow, raking leaves, cleaning windows and mowing the lawn, our employees are excited to donate their time to help local veterans. It’s such a popular event that there is a waiting list of employees who want to participate!

In 2018, two of our offices dedicated their Community Campaign to local veteran affiliated charities. The Madison office selected to raise funds and awareness for Badger Honor Flight. An organization that is connected to the national Honor Flight Network. This organization takes veterans who are either terminally ill or have served in World War II, the Korean War, or the Vietnam War on a trip to Washington D.C. to view the monuments created in their honor.

The Cincinnati office dedicated their campaign to raise funds and awareness for the Walleyes for Wounded Heroes organization, which provides opportunities for current or former service members. During the last week of June, every year charter captains and private boat owners take wounded heroes out for a four-day fishing trip at no cost. Walleyes for Wounded Heroes provides the meals, transportation, lodging, and entertainment.

As a company, LaForce is an Equal Opportunity Employer, and we highly encourage veterans to apply. Through state employment websites and resources, our Human Resources team is able to post open positions that are first visible to veterans to apply before the general public.

In addition, LaForce recruiters reach out to local Veteran Affairs office to provide information on available positions and answer any questions regarding opportunities available at LaForce.

LaForce is a proud supporter of the United States Military and would like to say thank you to all those who have served for your commitment, sacrifice, and bravery.